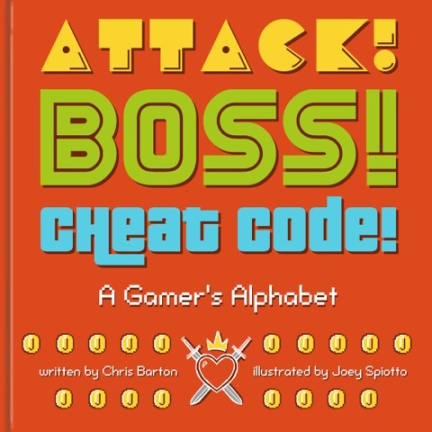 An ironic yet informative alphabet that defines the most important gaming terms that everyone needs to know, Attack! Boss! Cheat Code! A Gamer’s Alphabet is the ultimate crossover gift for our age, a book that can actually bring together video-game obsessed kids and their often perplexed parents.

If you can decipher the following sentence, you don’t need this book:

“This open beta game is in third-person but first-person is unlockable if you know the cheat code or install your own mod, but either way, for the best attack on the boss on this level, try to grab that power-up!”

Chris Barton is the author of the NYT bestseller SHARK VS. TRAIN and the Sibert Honor-winning THE DAY-GLO BROTHERS. In addition to those picture books, he’s the author of CAN I SEE YOUR I.D.? TRUE STORIES OF FALSE IDENTITIES, a young-adult nonfiction thriller. His upcoming books for young readers include THE AMAZING AGE OF JOHN ROY LYNCH (2015, Eerdmans), THE NUTCRACKER COMES TO AMERICA: HOW THREE BALLET-LOVING BROTHERS CREATED A HOLIDAY TRADITION (2015, Millbrook), SUPER TRUCK (2016, HarperCollins), and WHOOSH! LONNIE JOHNSON’S SUPER STREAM OF IDEAS (2016, Charlesbridge). Chris lives in Austin, TX.

Joey “Joe-bot” Spiotto is an illustrator from southern California. Joe has worked on film and video game projects with Warner Bros., Electronic Arts, Telltale Games, Gazillion, and many more. His tee shirts sell on Teefury.com, and his work is shown at the high-profile Gallery 1988 in Los Angeles, CA.