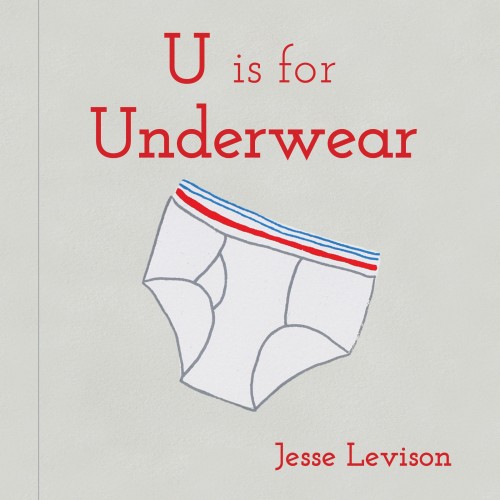 Artist and printmaker Jesse Levison brings style to the alphabet in U is for Underwear. Toddlers will keep turning the pages of this chunky board book featuring simple, vibrant, and graphic illustrations. Imbuing everyday objects with a sense of wonder, the bold artwork makes a perfect introduction to the ABCs for young pre-readers who can trace the letters with a finger and begin to understand the symbolic representation that underlies reading and writing.

Parents can begin to develop literacy in even very young children by exposing them to the letters of the alphabet, making U is for Underwear a fun and easy tool for imprinting little brains. Pleasing to the eye for both kids and adults, Jesse’s retro sensibility and witty simplicity makes this a potential cross-over title for their little learners—or at least a great gift for style-conscious parents.

Jesse Levison is an artist and screen-print maker based in Greenpoint, Brooklyn. She is the creative force behind Gold Teeth Brooklyn, which makes stationery, prints, and jewelry sold nationwide at chains including Anthropologie, and hundreds of independent stockists, as well as in Canada, the UK, and Australia. Jesse’s cards, jewelry, and objects bring a sense of wonder and playfulness to the everyday. Gold Teeth Brooklyn is known for its thoughtful palettes, hand-torn paper, and small batch runs. Born and raised in Miami, Florida, Jesse is influenced by the bold colors and tropical landscapes of south Florida while also drawing inspiration from the northern winters of New York. Her work has been featured on designsponge.com and she maintains an Esty storefront.