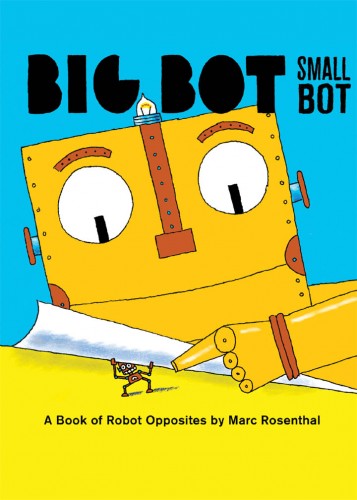 A Book of Robot Opposites

Robots are perennial kid-favorites. In this series, acclaimed illustrator Marc Rosenthal’s vividly colored, retro-futuristic robots encourage kids age 2 to 5 to lift the flaps and learn all about basic concepts.
Big Bot, Small Bot invites young readers to play with robots who demonstrate opposites such as “quiet” and “loud,” “front” and “back,” and “full” and “empty.” Each illustration in this interactive book is presented with a gatefold that, when lifted, transforms the image into its opposite! Simple yet endlessly entertaining, Big Bot, Small Bot is a perfect read-aloud for toddlers and preschoolers.
Printed on sturdy, thick paper, these titles can stand up to the challenge of little hands and repeated readings
Marc’s illustrations can be seen regularly in The New Yorker, Time, Forbes, Fortune, The Atlantic Monthly, The New York Times, Boston Globe, and The Washington Post; his previous children’s books have been described by The New York Times Book Review as “hugely appealing.”

Marc Rosenthal‘s illustrations appear regularly in The New York Times, The New Yorker, and many other publications. Marc has both written and illustrated numerous children’s books including Phooey! (HarperCollins, 2007) and Archie and the Pirates (HarperCollins, 2009), and illustrated many others, including the bestselling Bobo series, written by his wife, Eileen Rosenthal, I Must Have Bobo!, I’ll Save You, Bobo!, and Bobo the Sailor Man (Atheneum) and, most recently, Mogie: The Heart of the House, written by Kathi Appelt (S&S, 2014). Marc lives in the Berkshires in Massachusetts.