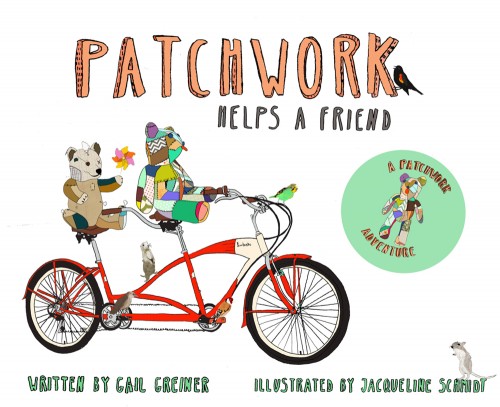 Never underestimate the power of good friends! Patchwork, a colorfully quilted stuffed bear, sets forth on a quirky journey and enlists the help of his wildly eclectic bunch of buddies including a great blue whale, a mama-loving llama, and a gracious narwhal to help him repair his best pal, a raggedy bear named Fred.

Patchwork Helps a Friend is the debut picture book from artist and designer Jacqueline Schmidt of Screech Owl Design. Schmidt’s charming illustrations bring to life the endearing tale written by Gail Greiner. As this imaginative story unfolds, we learn that anything can be accomplished with the help of trusted friends.

This sweetly illustrated story celebrates the value of friendship and the love of a good adventure while including always-captivating children’s book staples like talking animals, surprises, and even some dancing! For those who fell in love with Laura Vaccaro Seeger’s Dog and Bear, Patchwork Helps a Friend is a no-brainer must-have that promises to be read aloud over and over again!

Patchwork Helps a Friend is the introductory book in the series, Patchwork’s Adventures, taking youthful readers (ages 3 to 7) on highly visual, emotionally-driven adventures led by the oh-so loveable stuffed bear and his menagerie of animal comrades.

Gail Greiner writes about motherhood for WhattheFlicka.com, “Desperate Housewives'” actress Felicity Huffman’s website, and her work has been published in the anthologies The Little Big Book for Moms (Welcome Books) and Child of Mine: Writers Talk About the First Year of Motherhood (Hyperion). She has an MFA in fiction writing from Columbia University, and teaches English and Creative Writing at Greens Farms Academy in Westport, CT, and Children’s Literature at Rockland Community College. She lives in Nyack, New York with her partner, two children, their dog, and two cats.

Jacqueline Schmidt is the illustrator behind Screech Owl Design; her immediately recognizable style has made her whimsical depictions of natural and urban imagery (birds on bicycles is a recurring motif) popular as stationery, prints, and textiles at retailers such as Anthropologie, Papyrus, and more. She has an MFA in creative arts therapy and early childhood development and is the former creative director for Moomah. Jacqueline grew up in New York City, and now makes her home in Brooklyn, NY with her beloved husband, son, and cat.